Resale prices for Orlando-area homes ticked up yet again last month, as buyers came closer to paying sellers’ asking prices than at any time since February 2007, when the housing bubble was about to burst.

The median price for July sales reported by members of the Orlando Regional Realtor Association edged up to $125,750 from $125,000 in June; the midpoint price is now up 16.4 percent for the year, with year-over-year increases for 13 consecutive months, the Orlando Realtors reported Wednesday. A year ago, the median price was $115,500.

“What I find encouraging for the state of Orlando’s housing market is the jump in the percentage of ‘normal’ sales, which is up 16.34 percent for July 2012,” said Stephen Baker, broker for Re/Max Central Realty and chairman of the local association. “The percentages of foreclosures sales and short sales are both down, which along with the decline in inventory indicates that the ocean of these sales types is drying to a puddle.”

The area is nearing the point at which conventional sales would once again define the market. In July, more than 48 percent of sales in the core Orlando market (mainly Orange and Seminole counties) were normal, up from 42 percent a year ago; short sales comprised 28 percent of the overall mix, while foreclosures constituted 24 percent.

The average buyer paid 96.1 percent of the seller’s asking price, which is the smallest discount home buyers have received in more than five years. And the median time it took to sell a house — 82 days — is the shortest turnaround period since April 2010.

The area continues to suffer from an anorexic inventory of listings, with 8,106 properties available for sale in the core market. But, for the first time this year, the months of inventory on hand rose, from 3.1 months in June to 3.4 months in July.

Even with that slight uptick, though, the supply is about half what is considered healthy for a balanced market.

Don, giving us an update on what has been happening in Aspen....

FPME and FREC are in Aspen, Co.

Owner, Don Wilson talking about the real estate market and what we are doing to change it.  ... 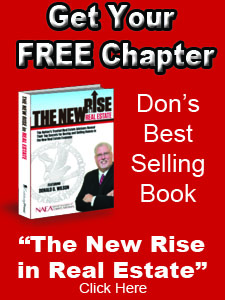